Since early childhood in Ireland images of far-flung places have always fascinated me. The albums of pictures taken by my father, a world traveler and accomplished amateur photographer, fascinated me. He worked for a small brewing company in West Cork and often received letters from suppliers overseas and he would give me the stamps for my collection. Stamps became the window to my world.   By the age of nine or ten I had a long list of the many places I wanted to visit – Lake Titicaca, Katmandu and Samarkand to name just a few!

In the 1980s I was definitely engrossed in all things Japanese and was very influenced by the extravagance of Noh costumes. In the 90s, career demands and lots of travel forced me to put my art on hold. But I never stopped collecting images and formulating ideas for that day when “I would get back to painting”! Finally that day arrived in 2012 when I retired – free at last!

I’d always wanted to try collage and mixed media. Mixed media allows me to pull images together, re-size or distort them and enhance with paint, pencil, and a variety of different tools. I work on paper, illustration board, canvas and wood panels. I use found and created images.

Some of the series I’ve done recently have tended to be reflective, taking time out to look at the past and ponder what the future will bring. Not unusual thoughts for anyone who has recently retired I think.

My themes generally evolve around history, travel and social commentary. I have always been interested in the period from around the 1890s to the end of the First World War, when old empires collapsed, new ones emerged and the world changed forever. In the Ireland I grew up in these events had huge consequences.

Some of my pieces contain social and historical narrative. For instance “Love at First Sight” was a result of the Marriage Equality debate here in California. My “Tall” series is a response to the social hypocrisy of the Victorian and Edwardian periods that was reflected in the dress codes for men and women
at the time. Women were confined in extremely uncomfortable corsets to create the “hour-glass” figure. Men had only to suffer tall starched collars while the military went on a splurge with plumed hats, skin tight pants and highly polished riding boots. Yards of gold braid and rows of medals threatened to tear shirtfronts apart!

It doesn’t always have to be serious. Sometimes you just want to have a little fun and bring color and images together.

Anything can happen; the tallest towers overturned; those in high places daunted; those overlooked
regarded. - Seamus Heaney. 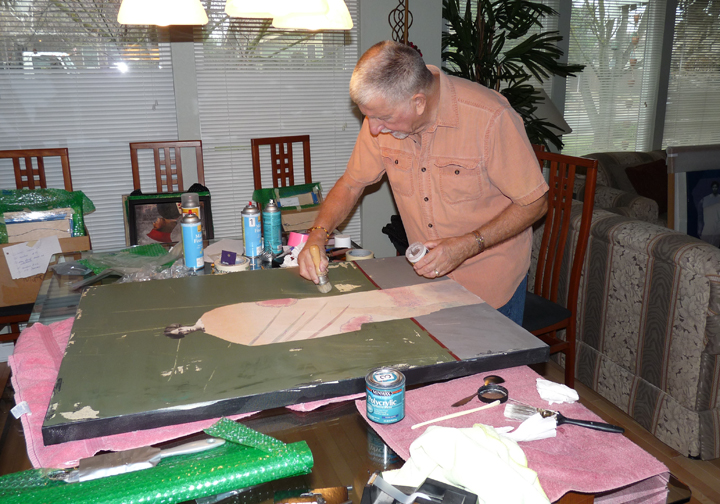